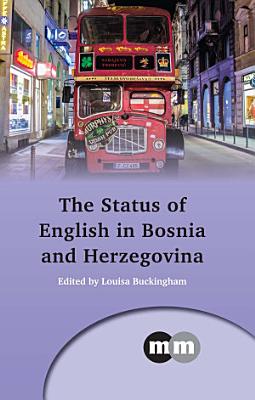 When Yugoslavia disintegrated in the early 1990s, competence in English was not widespread. This book explores how English came to be equated with economic survival for many during and after the ensuing war through a range of diverse social and professional contexts, from the classroom to the military to the International Criminal Court. While English provided social mobility for many, its abrupt arrival also contributed to the marginalization of those without the adequate language skills. The high level of international intervention in Bosnia and Herzegovina over the last two decades has contributed to a sense of normalization of the presence of English. Viewed as a far more complex issue than simple linguistic imposition, this book explores the widespread adoption of English and its effects on a nation recovering from war.

The Status of English in Bosnia and Herzegovina

Authors: Louisa Buckingham
Categories: Foreign Language Study
When Yugoslavia disintegrated in the early 1990s, competence in English was not widespread. This book explores how English came to be equated with economic surv

Authors: Sandra C. Deshors
Categories: Language Arts & Disciplines
At a time when globalization and the advent of the internet have accelerated the spread and diversification of English varieties worldwide, this book provides a

The Cambridge Handbook of World Englishes

Authors: Daniel Schreier
Categories: Language Arts & Disciplines
The plural form 'Englishes' conveys the diversity of English as a global language, pinpointing the growth and existence of a large number of national, regional

State-Building and Democratization in Bosnia and Herzegovina

Authors: Wendy Bosberry-Scott
Categories: High schools
This yearbook is the official guide to schools offering the International Baccalaureate Diploma, Middle Years and Primary Years programmes. It tells you where t

Authors: Iulia Motoc
Categories: Political Science
High hopes were placed in the ability of the European Convention and the Court of Human Rights to help realise fundamental freedoms and civil and political righ

Ethnic and National Identity in Bosnia-Herzegovina