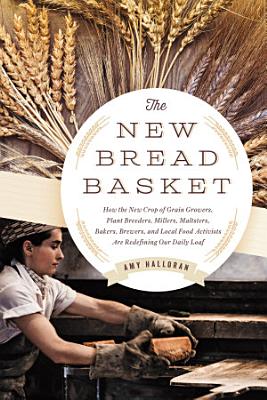 For more than 10,000 years, grains have been the staples of Western civilization. The stored energy of grain allowed our ancestors to shift from nomadic hunting and gathering and build settled communities—even great cities. Though most bread now comes from factory bakeries, the symbolism of wheat and bread—amber waves of grain, the staff of life—still carries great meaning. Today, bread and beer are once again building community as a new band of farmers, bakers, millers, and maltsters work to reinvent local grain systems. The New Bread Basket tells their stories and reveals the village that stands behind every loaf and every pint. While eating locally grown crops like heirloom tomatoes has become almost a cliché, grains are late in arriving to local tables, because growing them requires a lot of land and equipment. Milling, malting, and marketing take both tools and cooperation. The New Bread Basket reveals the bones of that cooperation, profiling the seed breeders, agronomists, and grassroots food activists who are collaborating with farmers, millers, bakers, and other local producers. Take Andrea and Christian Stanley, a couple who taught themselves the craft of malting and opened the first malthouse in New England in one hundred years. Outside Ithaca, New York, bread from a farmer-miller-baker partnership has become an emblem in the battle against shale gas fracking. And in the Pacific Northwest, people are shifting grain markets from commodity exports to regional feed, food, and alcohol production. Such pioneering grain projects give consumers an alternative to industrial bread and beer, and return their production to a scale that respects people, local communities, and the health of the environment. Many Americans today avoid gluten and carbohydrates. Yet, our shared history with grains—from the village baker to Wonder Bread—suggests that modern changes in farming and processing could be the real reason that grains have become suspect in popular nutrition. The people profiled in The New Bread Basket are returning to traditional methods like long sourdough fermentations that might address the dietary ills attributed to wheat. Their work and lives make our foundational crops visible, and vital, again.

Authors: Amy Halloran
Categories: Bread
For more than 10,000 years, grains have been the staples of Western civilization. The stored energy of grain allowed our ancestors to shift from nomadic hunting

The Middle Colonies: Breadbasket of the New World

A History of Agriculture and Prices in England

A New Dictionary of the Italian and English Languages Based Upon that of Baretti ... Compiled by John Davenport and Guglielmo Comelati

A New Dictionary of the Italian and English Languages, Based Upon that of Baretti, and Containing, Among Other Additions and Improvements, Numerous Neologisms ... and a Copious List of Geographical and Proper Names ...