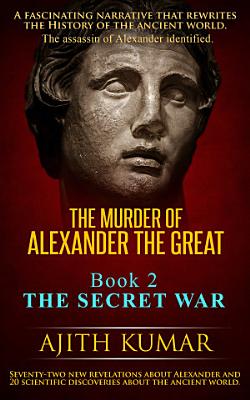 Seventy-two stunning findings about Alexander the Great and the assassin of Alexander the Great is finally identified. Who killed Alexander the Great? After over two thousand years of speculation, the assassin of Alexander is finally identified. To verify the truth, this historical narrative searches through a mass of conflicting records, including Indian and Greek classical texts. By assimilating new information from multiple sources, Ajith Kumar stitches together this scattered history with 72 pieces of fresh evidence to solve the perplexing murder mystery. Alexander’s destiny, it seems, was determined the moment he stepped into Taxila in India in 326 BC, as he was helplessly trapped in a different world, where an invisible enemy was leading a secret war against him. The Arthasastra of Chanakya, an epic treatise on statecraft and warfare, presents the multiple strategies of the 'secret war' which diverted and decimated the Greek army, and killed its supreme commander. In The Murder of Alexander the Great, Book 2: The Secret war, Ajith Kumar presents a new version of ancient history that still remains hidden in ancient Indian texts. The puzzling mystery behind Alexander's premature death is documented in Chanakya's 'Arthasastra,' a military manual of ancient India, which reveals devastating effects of the Secret War strategy employed by the Indians during the Greek invasion in 326 BC. The exotic weapon that killed Alexander is named as the 'Destroyer of time' in the Arthashastra, a military manual, and the Sanskrit Puranas. The Puranas also hold untold chapters of hidden history, which reveal how the Indians decisively destroyed the worldwide empire of Alexander the Great and changed the world for ever. The two-millennium-old murder mystery takes us back in time to the farthest corners of the primitive world, only to end in a stunning climax that lays bare the elusive assassin of Alexander.

THE MURDER OF ALEXANDER THE GREAT, BOOK 2: THE SECRET WAR

The Murder of Alexander the Great

The Murder of Alexander the Great, Book 1: The Puranas

A Murder in Thebes (Alexander the Great Mysteries, Book 2)

Authors: Paul Doherty
Categories: Fiction
Alexander the Great cannot be fooled... Paul Doherty writes an unputdownable Greek mystery of adventure and intrigue in A Murder in Thebes. Perfect for fans of

Authors: Paul Doherty
Categories: Fiction
A missing prince may provide the answers - can he be found? The Prince Lost to Time is Paul Doherty's second novel to feature Nicholas Segalla - a shadowy schol

The Song of the Gladiator (Ancient Rome Mysteries, Book 2)

Authors: Paul Doherty
Categories: Fiction
Mass murder is committed in one of the Emperor's own villas - can Claudia hunt down the perpetrator? The Song of the Gladiator is the second dramatic historical

Authors: Quintus Curtius Rufus
Categories: History
A translation, with detailed commentary, of Book 10 of Curtius Rufus' Histories, a major Roman source on the end of the reign of Alexander the Great. The Introd

Authors: Paul Doherty
Categories: Fiction
Hugh Corbett is drawn into the dangerous disputes for the Scottish throne... Crown in Darkness is the second gripping novel of murder and mayhem in Paul Doherty

Authors: David Quint
Categories: Literary Criticism
The message of Virgil's Aeneid once seemed straightforward enough: the epic poem returned to Aeneas and the mythical beginnings of Rome in order to celebrate th

The Complete Works of Flavius Josephus. Translated by William Whiston