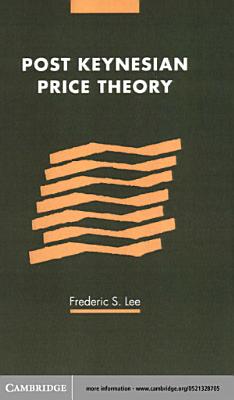 Frederic Lee sets out the foundations of a post-Keynesian price theory through developing an empirically grounded production schema. The administered, normal cost and mark-up price doctrines are explained in parts I-III of the book, as many of their theoretical arguments are important for developing the foundations. This involves discussing the work of Gardiner Means, Philip Andrews, and Michal Kalecki as well as the developers of the doctrines, such as Edwin Nourse, Paolo Sylos Labini, Harry Edwards, Josef Steindl and Alfred Eisner. Drawing upon the arguments and formal modelling offered by the doctrines, in conjunction with empirical evidence from one hundred studies on pricing and production, Dr Lee develops an empirically grounded pricing model and production schema. He argues that the model and the schema together constitute the foundations for post-Keynesian price theory.