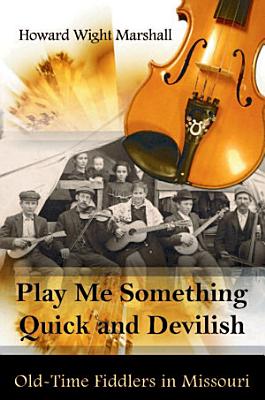 Play Me Something Quick and Devilish explores the heritage of traditional fiddle music in Missouri. Howard Wight Marshall considers the place of homemade music in people’s lives across social and ethnic communities from the late 1700s to the World War I years and into the early 1920s. This exceptionally important and complex period provided the foundations in history and settlement for the evolution of today’s old-time fiddling. Beginning with the French villages on the Mississippi River, Marshall leads us chronologically through the settlement of the state and how these communities established our cultural heritage. Other core populations include the “Old Stock Americans” (primarily Scotch-Irish from Kentucky, Tennessee, North Carolina, and Virginia), African Americans, German-speaking immigrants, people with American Indian ancestry (focusing on Cherokee families dating from the Trail of Tears in the 1830s), and Irish railroad workers in the post–Civil War period. These are the primary communities whose fiddle and dance traditions came together on the Missouri frontier to cultivate the bounty of old-time fiddling enjoyed today. Marshall also investigates themes in the continuing evolution of fiddle traditions. These themes include the use of the violin in Westward migration, in the Civil War years, and in the railroad boom that changed history. Of course, musical tastes shift over time, and the rise of music literacy in the late Victorian period, as evidenced by the brass band movement and immigrant music teachers in small towns, affected fiddling. The contributions of music publishing as well as the surprising importance of ragtime and early jazz also had profound effects. Much of the old-time fiddlers’ repertory arises not from the inherited reels, jigs, and hornpipes from the British Isles, nor from the waltzes, schottisches, and polkas from the Continent, but from the prolific pens of Tin Pan Alley. Marshall also examines regional styles in Missouri fiddling and comments on the future of this time-honored, and changing, tradition. Documentary in nature, this social history draws on various academic disciplines and oral histories recorded in Marshall’s forty-some years of research and field experience. Historians, music aficionados, and lay people interested in Missouri folk heritage—as well as fiddlers, of course—will find Play Me Something Quick and Devilish an entertaining and enlightening read. With 39 tunes, the enclosed Voyager Records companion CD includes a historic sampler of Missouri fiddlers and styles from 1955 to 2012. A media kit is available here: press.umsystem.edu/pages/PlayMeSomethingQuickandDevilish.aspx

Play Me Something Quick and Devilish

Authors: Chris Megson
Categories: Literary Criticism
Essential for students of Theatre Studies, this series of six decadal volumes provides a critical survey and reassessment of the theatre produced in each decade

Authors: Mary Luckhurst
Categories: Drama
One of Europe's greatest playwrights, Caryl Churchill has been internationally celebrated for four decades. She has exploded the narrow definitions of political

Authors: Poonam Trivedi
Categories: Literary Criticism
In this critical volume, leading scholars in the field examine the performance of Shakespeare in Asia. Emerging out of the view that it is in "play" or performa

The Work, Conversations with English-Canadian Playwrights

A Critical Companion to Early Childhood

Authors: Michael Reed
Categories: Education
In this stimulating and provocative book the editors have drawn together a diverse and international range of respected authors, each of whom has taken a critic