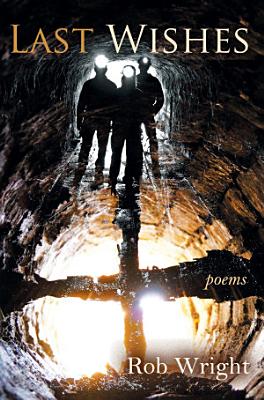 Rob Wright's Last Wishes is eclectic and delves into mining grit and lifestyle as fluently as it does into spiritual hopes and despairs, or the mind's lucidity and aberrations. Well-traveled in time and place, Last Wishes' culturally diverse characters and scenes--framed in Philadelphia, Fort Meyers, Manhattan, São Paulo, Kowloon, Majdanek, or elsewhere--are memorable or miserable. Accounts of ghosts and hauntings, imagined or real, include heart-stopping witness narratives of the Holocaust and other atrocities. This is a seasoned inaugural collection--a special honoree for the 2019 Able Muse Book Award. PRAISE FOR LAST WISHES Rob Wright's poems in Last Wishes ache with a quiet, exquisite music. Whether at the edge of the forest, or before a mirror regarding his own face, or at the limit of what a son can feel for his father, Wright calls us to join him on his search for order and meaning, even as he questions what he finds: "The shell that holds all grief and memory, / in chains of molecules that make a mind, / will turn back into atoms, hungry, free. / We're spirits caught inside our skin and hair-- / ephemeral our dramas, spun from air." Such is the breathtaking beauty of Last Wishes, to long for what seems so close and yet, in the end, we cannot know. --Rafael Campo, author of Comfort Measures Only: New and Selected Poems One of Wright's gifts is the age-old poetic magic of conveying beauty in what might at first appear to offer up nothing but ugliness. . . . It is fitting that one of the titles here is "Prologue for an Imaginary Play," because Wright's poems often are, in essence, little plays. The landscapes here are never static; like a photographer, or a cinematographer, Wright captures his subjects at their most revealing in a flash. Scenes are arranged and rendered at the moment of greatest drama and tension. --Alison Hicks (from the foreword), author of You Who Took the Boat Out ﻿ The first poem in Last Wishes describes in evocatively exact and gritty detail a landscape of abandoned mines, and ends with the poet’s mind reaching out toward the miners who once worked there: “I thought/ how hunger drives a man to crawl beneath/ the brittle crust that shuts out sun and sky.” Moments like this are repeated again and again throughout this obsessively compelling book—a surface (often enough a fairly bleak one) is described in richly precise detail, and out of it pasts, ghosts, the dead, revenants and spectral appearances emerge with a kind of beckoning, unreachable clarity that is at times wistful and at times brutal. If these poems were photographs most of them would be in grimmest black and white, but they would make a most marvelously enthralling exhibition. —Dick Davis, author of Faces of Love: Hafez and the Poets of Shiraz

Authors: Rob Wright
Categories: Poetry
Rob Wright's Last Wishes is eclectic and delves into mining grit and lifestyle as fluently as it does into spiritual hopes and despairs, or the mind's lucidity

Authors: Helen Read
Categories: Reference
Everyone has a Life Story to tell. No matter whether youve lived a life in the spotlight or away from public gaze, your life is one of great significance to tho

Authors: Shelley Munro
Categories: Fiction
Freedom. Zane craves it, but to earn liberty he must fulfill the last wish on his genie contract and evade his boss’s clutches for ten days. If he fails, it w

My Personal and Final Wishes

Authors: Nancy L. Miller
Categories: Self-Help
When someone dies the family is in a grief mode. They have no idea what kind of clothes to put on the deceased, what bills have to be paid or even what bank acc

The Last wish of Priest Fellini

Authors: Joann Flammer
Categories:
Noah didn't believe in wizards or dragons...until he made a wish on a shiny coin and his five-year-old sister was accidentally whisked away to the dragon's cave

Authors: Ajay K Pandey
Categories: Fiction
His father's over expectations only ruined his self-confidence further with each failure. A ray of hope walked into his life as his wife, a charismatic personal

Authors: Suzanne I Barchers
Categories: Juvenile Fiction
In this Indian tale, a princess learns a terrible secret about the man she loves, yet she marries him anyway. Her devotion and persistence pay off when she is g

Authors: Mary Beth Traut
Categories: Health & Fitness
After losing their father to diabetes, the children in the Traut family faced the very real fact that they were losing their mother as well. Diabetes was claimi