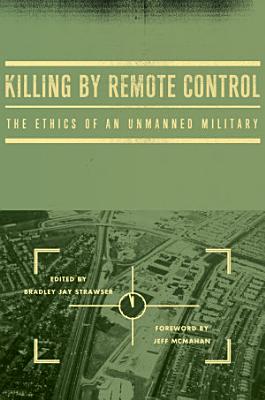 The increased military employment of remotely operated aerial vehicles, also known as drones, has raised a wide variety of important ethical questions, concerns, and challenges. Many of these have not yet received the serious scholarly examination such worries rightly demand. This volume attempts to fill that gap through sustained analysis of a wide range of specific moral issues that arise from this new form of killing by remote control. Many, for example, are troubled by the impact that killing through the mediated mechanisms of a drone half a world away has on the pilots who fly them. What happens to concepts such as bravery and courage when a war-fighter controlling a drone is never exposed to any physical danger? This dramatic shift in risk also creates conditions of extreme asymmetry between those who wage war and those they fight. What are the moral implications of such asymmetry on the military that employs such drones and the broader questions for war and a hope for peace in the world going forward? How does this technology impact the likely successes of counter-insurgency operations or humanitarian interventions? Does not such weaponry run the risk of making war too easy to wage and tempt policy makers into killing when other more difficult means should be undertaken? Killing By Remote Control directly engages all of these issues. Some essays discuss the just war tradition and explore whether the rise of drones necessitates a shift in the ways we think about the ethics of war in the broadest sense. Others scrutinize more specific uses of drones, such as their present use in what are known as "targeted killing" by the United States. The book similarly tackles the looming prospect of autonomous drones and the many serious moral misgivings such a future portends. "A path-breaking volume! BJ Strawser, an internationally known analyst of drone ethics, has assembled a broad spectrum of civilian and military experts to create the first book devoted to this hot-button issue. This important work represents vanguard thinking on weapon systems that make headlines nearly every day. It will catalyze debates policy-makers and military leaders must have in order to preserve peace and protect the innocent. - James Cook, Department Chair/Head of Philosophy, US Air Force Academy "The use of 'drones' (remotely piloted air vehicles) in war has grown exponentially in recent years. Clearly, this evolution presages an enormous explosion of robotic vehicles in war - in the air, on the ground, and on and under the sea. This collection of essays provides an invaluable contribution to what promises to be one of the most fundamental challenges to our assumptions about ethics and warfare in at least the last century. The authors in this anthology approach the ethical challenges posed by these rapidly advancing technologies from a wide range of perspectives. Cumulatively, they represent an essential overview of the fundamental ethical issues involved in their development. This collection makes a key contribution to an urgently needed dialogue about the moral questions involved." - Martin L. Cook, Adm. James B. Stockdale Professor of Professional Military Ethics, Professor Leadership & Ethics, College of Operational & Strategic Leadership, U.S. Naval War College

Authors: Bradley Jay Strawser
Categories: History
A new powerful military weapon has appeared in the skies of world and with it a new form of warfare has quickly emerged bringing with it a host of pressing ethi

Authors: James DeShaw Rae
Categories: Political Science
The book examines principal arguments for and against the use of unmanned aerial vehicles for surveillance and 'targeted killing.' Addressing both sides of the

Drones and Targeted Killing in the Middle East and Africa

Authors: Christine Sixta Rinehart
Categories: Political Science
The use of drone warfare has become a controversial foreign policy weapon to keep the United States safe from further terrorist attacks. This book is an assessm

Authors: Lieutenant Colonel Wayne Phelps
Categories: History
A “can’t-miss for anyone interested in current military affairs,” On Killing Remotely reveals and explores the costs—to individual soldiers and to socie

Authors: Neil C. Renic
Categories: Political Science
This book offers an engaging and historically informed account of the moral challenge of radically asymmetric violence -- warfare conducted by one party in the

Authors: Tamar Meisels
Categories: Philosophy
Known terrorists are often targeted for death by the governments of Israel and the United States. Several thousand have been killed by drones or by operatives o

Authors: B. Strawser
Categories: Political Science
Strawser examines several possible ethical justifications for the killing of Osama bin Laden and finds nearly all of them wanting. One, however, he argues is so