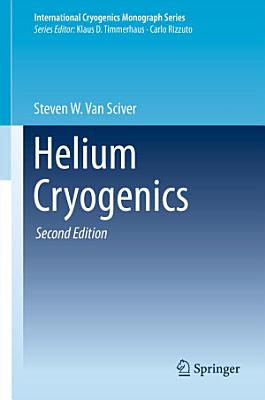 Twenty five years have elapsed since the original publication of Helium Cryogenics. During this time, a considerable amount of research and development involving helium fluids has been carried out culminating in several large-scale projects. Furthermore, the field has matured through these efforts so that there is now a broad engineering base to assist the development of future projects. Helium Cryogenics, 2nd edition brings these advances in helium cryogenics together in an updated form. As in the original edition, the author's approach is to survey the field of cryogenics with emphasis on helium fluids. This approach is more specialized and fundamental than that contained in other cryogenics books, which treat the associated range of cryogenic fluids. As a result, the level of treatment is more advanced and assumes a certain knowledge of fundamental engineering and physics principles, including some quantum mechanics. The goal throughout the work is to bridge the gap between the physics and engineering aspects of helium fluids to provide a source for engineers and scientists to enhance their usefulness in low-temperature systems. Dr. Van Sciver is a Distinguished Research Professor and John H. Gorrie Professor of Mechanical Engineering at Florida State University. He is also a Program Director at the National High Magnetic Field Laboratory (NHMFL). Dr. Van Sciver joined the FAMU-FSU College of Engineering and the NHMFL in 1991, initiating and teaching a graduate program in magnet and materials engineering and in cryogenic thermal sciences and heat transfer. He also led the NHMFL development efforts of the cryogenic systems for the NHMFL Hybrid and 900 MHz NMR superconducting magnets. Between 1997 and 2003, he served as Director of Magnet Science and Technology at the NHMFL. Dr. Van Sciver is a Fellow of the ASME and the Cryogenic Society of America and American Editor for the journal Cryogenics. He is the 2010 recipient of the Kurt Mendelssohn Award. Prior to joining Florida State University, Dr. Van Sciver was Research Scientist and then Professor of Nuclear Engineering, Engineering Physics and Mechanical Engineering at the University of Wisconsin-Madison from 1976 to 1991. During that time he also served as the Associate Director of the Applied Superconductivity Center. Dr. Van Sciver received his PhD in Low Temperature Physics from the University of Washington-Seattle in 1976. He received his BS degree in Engineering Physics from Lehigh University in 1970. Dr. Van Sciver is author of over 200 publications and patents in low temperature physics, liquid helium technology, cryogenic engineering and magnet technology. The first edition of Helium Cryogenics was published by Plenum Press (1986). The present work is an update and expansion of that original project.

Heat and Mass Transfer in Refrigeration and Cryogenics

Authors: Klaus D. Timmerhaus
Categories: Science
This is a benchmark reference work on Cryogenic Engineering which chronicles the major developments in the field. Starting with an historical background, this b

Authors: T. Haruyama
Categories: Science
This book contains the proceedings of the 16th ICEC/ICMC Conference, held in Kitakyushu, Japan, on 20th-24th May 1996. The Proceedings are presented in three vo

Authors: Quan-Sheng Shu
Categories: Science
In recent years, the technology of cryogenic comminution has been widely applied in the field of chemical engineering, food making, medicine production, and par

Authors: Bahman Zohuri
Categories: Science
Physics of Cryogenics: An Ultralow Temperature Phenomenon discusses the significant number of advances that have been made during the last few years in a variet