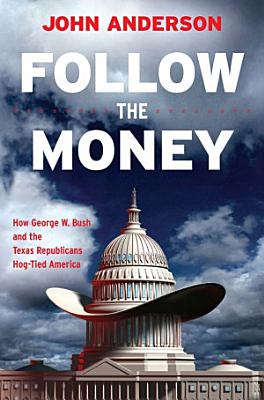 With its barbecues, new Cadillacs, and $4,000 snakeskin cowboy boots, Texas is all about power and money -- and the power that money buys. This detailed and wide-scope account shows how a group of wealthy Texas Republicans quietly hijacked American politics for their own gain. Getting George W. Bush elected, we learn, was just the tip of the iceberg.... In Follow the Money, award-winning journalist and sixth-generation Texan John Anderson shows how power in Texas has long been vested in the interconnected worlds of Houston's global energy companies, banks, and law firms -- not least among them Baker Botts, the firm controlled by none other than James A. Baker III, the Bush family consigliere. Anderson explains how the Texas political system came to be controlled by a sophisticated, well-funded group of conservative Republicans who, after elevating George W. Bush to the American presidency, went about applying their hardball, high-dollar politicking to Washington, D.C. When George Bush reached the White House, he brought with him not only members of the Texas legal establishment (among them former White House counsel Harriet Miers and Attorney General Alberto Gonzales) but empowered swarms of Republican lobbyists who saw in Bush's arrival a way to make both common cause and big money. Another important Beltway Texan was Congressman Tom DeLay, the famous "Exterminator" of Houston's Twenty-second District, who became majority leader in 2003 and controlled which bills made it through Congress and which did not. DeLay, in turn, was linked to lobbyist Jack Abramoff, who used his relationships with both DeLay and Karl Rove on behalf of his clients, creating a shockingly corrupt flow of millions of dollars among Republican lobby groups and political action committees. Washington soon became infected by Texas-style politics. Influence-peddling, deal-making, and money-laundering followed -- much of it accomplished in the capital's toniest restaurants or on the fairways and beaches of luxurious resorts, away from the public eye. The damaging fallout has, one way or another, touched nearly all Americans, Democrat and Republican alike. Follow the Money reveals the hidden web of influence that links George W. Bush, Dick Cheney, and the Texas Republicans to the 2000 recount in Florida; the national tort-reform movement; the controversial late-hour, one-vote passage of the Medicare Reform Act; congressional redistricting schemes; scandals in the energy sector; the destruction of basic constitutional protections; the financial machinery of the Christian right; the manipulation of American-Indian tribe casinos; the Iraq War torture scandals; the crooked management of the Department of the Interior; the composition of the Supreme Court; and the 2007 purges of seasoned prosecutors in the Justice Department. Some of the actors are in federal prison, others are on their way there, and many more have successfully eluded a day of reckoning. Told with verve, style, and a not-so-occasional raised eyebrow, Anderson's account arcs directly into tomorrow's headlines. Startling in its revelations, Follow the Money is sure to spark controversy and much-needed debate concerning which direction this country goes next.

Authors: John Anderson
Categories: Political Science
With its barbecues, new Cadillacs, and $4,000 snakeskin cowboy boots, Texas is all about power and money -- and the power that money buys. This detailed and wid

Authors: Bob DeGeorge
Categories: Fiction
It appears to be just another case in a pile of hundreds for seasoned San Jose police detectives Rex Johnson and Kat Sanchez. But when the two detectives open a

Authors: Steve Boggan
Categories: Travel
DIV ‘Fantastic debut’ Time Out 5-Star Review 'Its randomness is its joy' The Independent 'A picaresque travelogue about chasing an idea through down-home mo

The Encyclopedia of Police Science

Authors: Jack R. Greene
Categories: Science
These developments appear in the third, expanded edition of the Encyclopedia of Police Science. 380 entries examine the theoretical and practical aspects of law

Authors: Dr. Charles A. Rice, PhD
Categories: Biography & Autobiography
This tome surrounds the philosophies of Truth v. Perception, it considers the dichotomy of Truth v. the totality of Truth; and it's complicated in the thinking;

Authors: Jonathan A. Grubb
Categories: Social Science
From Game of Thrones to Breaking Bad, the key theories and concepts in criminal justice are explained through the lens of television In Crime TV, Jonathan A. Gr